Race, Class and Education in Brazil

Much of empirical social science research consists of collecting social data and interpreting them.  The data collection phase follows some reasonably well-understood and generally accepted principles.  The interpretation of that data is much more controversial, especially with respect to causality.  To demonstrate this, we consider three variables that are central to the national being of Brazil.  The background is provided in this article:

The history of slavery in Brazil is considerably different from the history of slavery in the US. While it was equally cruel and inhuman, blacks in Brazil were allowed to purchase their freedom—and many did. Freed blacks would collect money to free other slaves. In the town of Ouro Preto (Black Gold), an extremely wealthy town in the late 1800s, successful gold miners and merchants showed off their wealth by building expensive baroque churches to 'thank God for their good fortune'. One of the most impressive examples of these churches was built by a black brotherhood.

Further, the most famous architect and artist not only of Ouro Preto, but of the entire Brazilian baroque was Antonio Francisco Lisboa (Aleijadinho—The Little Cripple), a product of a Portuguese builder and black slave. Clearly, one difference between the US and Brazil regarding slavery and mating of whites and slaves is that in Brazil this was open and even 'accepted'; in the US we still talk about Sally Hemings in whispers! Finally, Brazil passed a law requiring children of slaves—including mixed-race children—to be freed: the opposite of our one-drop rule.

Brazilian scholars who study Brazil's ethnic and racial populations today divide the population into these broad groups: European—including Portuguese and Spanish (they believe Hispanic is a US made-up category), British, Italian and Germans; African; Amerindian; Asian (primarily Japanese), and mixed-race, or pardos.

As many who have a peripheral understanding of race in Brazil know, the mixed-race group is divided into a variety of subcategories,—or tipos—including loura, branca, morena, mulata and preta (Fish, 2002). Officially now the government lumps these altogether under one category. Again, US detractors point to these various racial labels as a throwback to our history where people were labeled mulatto, octoroon, quadroon, etc., and see this as a slippery slope for racial subdivisions in this country (Teixeira, 2003).

One of my most interesting observations is that in Brazil almost every group I observed—early childhood programs, school groups, choirs and instrumental groups, Lions Clubs, kids sitting in shopping centers and eating or just socializing, and dance groups, were all made up of people who ranges in color from what the Brazilians consider black to what they consider white, with every color of brown in between.

I never saw students, youth groups, or adults voluntarily segregate themselves by color; I never heard any discussion from the young people I was around that certain things are a "black thing", "Asian thing", "white thing", etc.—largely because most of these youths did not fit any of these single-race categories. The re-segregation of schools in the US into single-race student groups, popularly supported by many academic experts (Tatum, 1997), just does not seem to exist in Brazil.

While racial divisions in Brazil are not clearly defined, class lines are. There are the very wealthy, the middle class, and the very poor. And in Brazil the very poor make up a large percentage of the population. You see them on the streets trying to sell food and trinkets when you stop at a traffic light; they descend on you when you park your car, offering 'protection' for a price (and, if you don't pay, your car will not be protected); and, you see them along the highways in miserable shacks trying to sell all sorts of things to drivers speeding by.

Clearly this class structure overlaps into race; but it is categorically untrue to say all the wealthy are white, and all the poor, nonwhite. It is also inaccurate to look at Brazilian society as if it were a society with the same potential for upward mobility as exists in our society, and then to blame poverty of people of color on racism. In Brazil it is extremely difficult for anyone to advance social levels, regardless of race.

This is due to a complex set of societal factors, but anchored in the educational system that only works for families with money. Children must attend private secondary schools to be able to pass the vestibular entrance exam to get into the free universities; if they fail they can go to private universities that cost money to attend. In both cases the poor are shut out.

We will now cite some survey data from the 2002 TGI Brasil study.  This is a survey of 10,624 persons between the ages of 12 to 64 years old conducted during 2002.  Within this study, all persons are classified according to race, socio-economic level and the education level of the head of household.  A three-dimensional cross tabulation of the three variables was obtained.  There are several ways to present this data.  Of the three variables, it would seem that race is determined genetically, whereas the other two are socially determined.  Therefore, it is logical to look at the distribution of socio-economic level and education of head of household.  The next two charts show these distributions. 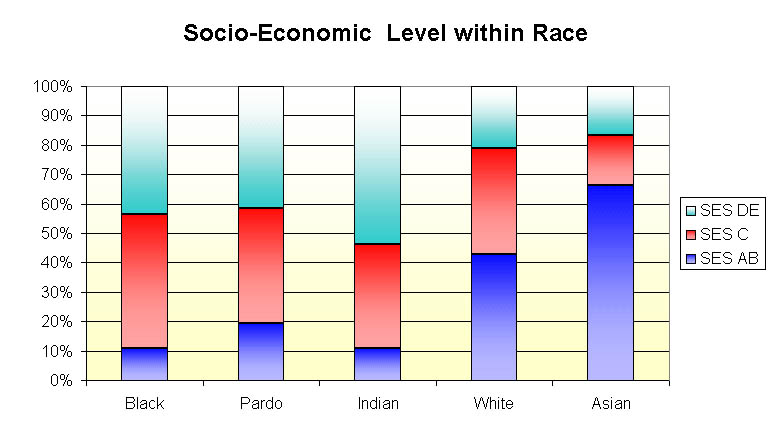 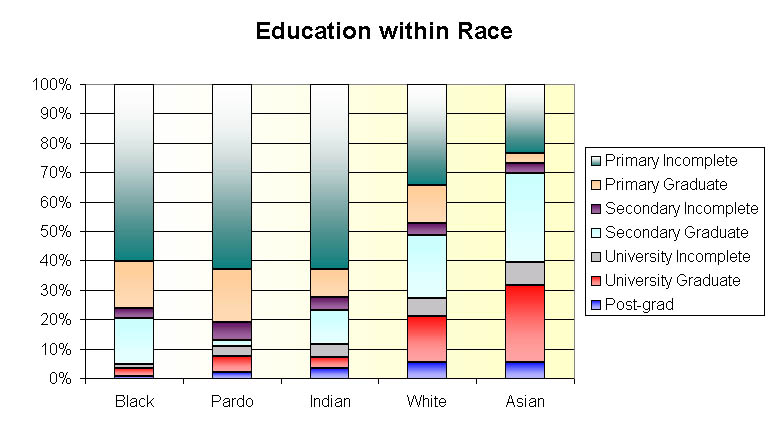 But how are we supposed to interpret these data, which have been replicated again and again?  Unfortunately, social science theories are unavoidably infested and distorted by the researcher's own values, attitudes and knowledge base.  This set of data is consistent with any number of social theories, ranging from racist theories of white supremacy to Marxist theories of class exploitation.  These data may be consistent with a theory, but they do not validate any one of these theories to the exclusion of all others.

It may be true that we cannot establish causality with certainty.  But consider similar situations --- in like manner, the tobacco companies had long argued that it cannot proven beyond scientific certainty that cigarette smoking causes diseases such as lung cancer and emphysema.  Eventually, when the preponderance of evidence is such that correlations between smoking and diseases occur everywhere one looks, then even the tobacco companies realized that they cannot keep a straight face.  However one wants to theorize the relationship among race, social class and education (and we can also add gender into the mix), these findings are found repeatedly.  At some point, this will have to have some impact on policy formulation.

A related issue is the ability to classify racial categories accurately and consistently, which we have addressed in another article (Racial Classifications in Latin America).   As the cited articles show, racial classification is often inaccurate and unreliable.  This would seem to support the argument for the elimination of the collection of data on race, since it is neither accuracy nor useful.  Such is the case with the Proposition 54 ballot in California scheduled to be voted upon in late 2003.  The American Sociological Association steps in with these words:

A large body of social science research documents the role and consequences of race in primary social institutions and environments, including the criminal justice, education and health systems, job markets, and where people live. These studies illustrate how racial hierarchies are embedded in daily life, from racial profiling in law enforcement, to 'red-lining' communities of color in mortgage lending, to sharp disparities in the health of members of different population groups.

... Sociologists have long examined how race–a social concept that changes over time–has been used to place people in categories. Some scientists and policymakers now contend that research using the concept of race perpetuates the negative consequences of thinking in racial terms. Others argue that measuring differential experiences, treatment, and outcomes across racial categories is necessary to track disparities and to inform policymaking to achieve greater social justice.

... Sociological scholarship on "race" provides scientific evidence in the current scientific and civic debate over the social consequences of the existing categorizations and perceptions of race; allows scholars to document how race shapes social ranking, access to resources, and life experiences; and advances understanding of this important dimension of social life, which in turn advances social justice. Refusing to acknowledge the fact of racial classification, feelings, and actions, and refusing to measure their consequences will not eliminate racial inequalities. At best, it will preserve the status quo.